Posted on January 11, 2013 by smallsolutionsbigideas 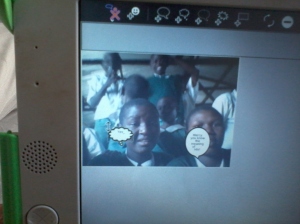 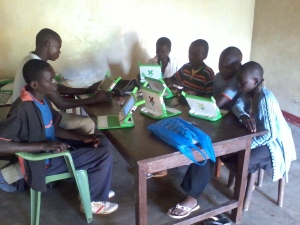 From 1st of December 2012 to 15 December 2012, we have been averagely dealing with 40 kids in our centre daily from Monday to Saturday every week. When it comes to departure time kids are just forced to leave the place since they have great interest and they wish to continue having fun with the laptops

What is being done at the market place as per sugar laptop activity?

Record sugar lab activity-Kids are using the activity to create and record role plays in form of movies showing how the HIV virus attack the immune system of human being and weaken the white blood cells. Remember that this is not done in one group; instead they are arranged in different groups with the help of xo teachers who 1st facilitate health talks about the effects of HIV on any human health. After talks kids divide themselves to act their role plays.  Those playing virus par pretend to have deep hostile voice ready to attack the white blood cells and those playing white blood come in plenty well armed to the virus, at the end of the game the virus seem to win the game as the white blood cells becomes weak and ask for support which comes  from the armed forces called ART/ARV.

Write sugar lab activity-its used to type the narrated stories from the outreach made by the learners and saved for future reference. The most important think kids target to type is issues coming out as new ideas of which they use as tittles for discussions in their focused group dialogues. They do these dialogues by use of chat sugar lab activity as teachers monitor their discussions to direct and correct them where necessary.

Scratch sugar lab activity-After great exploration to the xo kids have come up with many interesting games that are really steering up their minds and as a result they feel technologically fit for they can make animal,human,birds and mathematical related scripts and put them in motion at the same time. When they work with scratch you could hear “miuuh” the cat’s sound which makes them automatically group themselves to see which group can do better than the other. This kind of competition is really encouraging them to create scripts that are very educative. Jeremiah Lusaka a former STD 8 Butonge primary school is much interested in the following scratch projects in which he is the best among other learners starting with flow kiss followed by; Simulation plays e.g spinner, gravity blocks, simple circuit and weather simulations.

Interactive art which is much used in HIV communication-garden secret  and expression creator and last but not least, a big number of kids coming at the market centre enjoy scratch games as scrolling demo, fish comp and pony.

Generally, a lot was done on the scratch sugar lab activity by kids who really enjoyed merry x-mass beats as it was around the corner among other related music found in the scratch files. Despite the fact that when in market place center room you could find kids dancing with faces of joy according to beats that were being playing on the xo sugar lab activity.

Browse sugar lab activity has done a lot for the kids at the market place as far as science and other related information from the activity is concerned.

Antony Mabonga a form one student at Khasoko high school testifies that he is getting books like the blue sky and reading stories that are improving his English.  Not only is he benefiting from the blue sky books but also becoming rich in science knowledge as he does his research on science books such as chemistry, biology and physics. Antony proceed by saying that his now mastering the periodic table in chemistry a science subject and different terminologies in the subject.

Apart from books he is also being informed about world and nature images from the above mentioned sugar lab activity as well as dictionaries, sample music and world maps related to Geography.

Tux math sugar lab activity– Math command training academy is really helping learners to master simple mathematical table such as multiplications, subtraction, addition and division thus having them at their finger tips. Edwin wanjala a std 6 Alicia forty children’s home says that he is really benefiting from the initiative as he believes that he will do better in questions related to multiplication, addition, division and subtraction at an increased speed with highest accuracy  as well as fractions.

Jesse Mwita STD 6 Butonge primary school says the market place centre had given him an opportunity to do a lot on paint activity on the xo sugar lab as he can now use shapes to come up with different structures as a house, a square, rectangle, a football pitch among other mathematical related shapes and coloring and he is full hopes of doing well in drawing and design in future if he will continue using the xo laptop technology.

A general comment about record sugar lab activity by the kids is that the activity is activating their personality as they can role play before people with no fear of HIV and interview older people of their parent’s age while recording their voices for future use with their colleagues at school.

17/12/2012-It was a historic day for our market place center as we received 120 kids at  ago and all wanted to access the xo laptops for learning.

The room was full of joy, dancing, singing thus curiously watching to see what was happening for knew learners who had interest and a lot of eagerness to know how to operate the xo machine.

Most of the kids majored on record activity as others role played in drama to be recorded. Later on, they grouped themselves with a lot of struggle and competition to get closer to the laptop so as to see what was being done.

Having achieved to get more learners of age, we had a problem of inadequate space and insufficient number of laptops hence could not ultimately meet their needs.

18/12/2012-The number of kids coming for xo sugar fun reduced to 96. They did a lot on scratch sugar lab activity by playing games mentioned above by Jeremiah Lusaka

Those who were attending the class for the second time found it too difficult to play/have fun with it but by the help of their colleagues who had mastered it, they confidently learned and came out happily.

19/12/2012- The market place was noisy as kids were composing and singing songs  warning kids of their age  of the dangers of HIV if they are not informed about the virus. Messages in the songs were that the virus has no boundaries as it affects the entire generation whether rich or poor, old or young.

After entertainment, they came up with interesting role plays with similar messages to the songs to show how riches can lead to HIV transmission if not properly observed.

How it was done;

Kids who role played as rich people used money to convince young girls to befriend them without knowing their HIV status. But the most important thing for the girls was to be bought what they wanted instead of caring about their health.

A continuation of the role play showed how these young girls on other hand befriended young men who also didn’t want to care about their HIV status but believed in sexual relationship.

After all these, xo teachers facilitated a discussion at the market centre to enrich kids with HIV prevention measures and it was a fantastic day for the whole community of Bukokholo.

On 27th kids started arriving at the market place at 12.00 noon after a short break of x-mass celebration.

This date kids came in shifts because they were arriving at alternative times with a big number coming inn in the evening hours as from 3-4 p.m showing a lot of learning interest basically on a most child centered scratch sugar lab activity. The market place was full of learning noise in the room as the kids wanted to know what they had not known before. At the end of the day i.e. 6.30 p.m total number of kids that reported at the market place was 43.

On 28th kids reported at the market place starting from 10.00 am though in shifts since they did not arrive at the same time for the session.

The day was specifically for role plays with a lot of related health talks to inform kids the dangers of HIV.

Way of facilitating the health talks was:

This kind of activity started at 2.30 p.m when we had 45 kids present at the market place but as from 10.30 am kids were preparing what to perform in the afternoon as planned before.

Despite the fact that as some kids were performing, others were using the xo laptop to record video and interesting enough kids were pushing each other in competition to be seen on the xo laptop screen.

At closure time, we had 65 kids including those at the adolescence stage who were much impressed with the role plays and health talks performed at the market place.  Adolescent boys and girls promised to be coming to boost children’s talent through xo technology and at the same time use them for IT learning.

On 29th, 30th and 31st we allowed kids to have fun with the xo laptop on any sugar lab activity of their choice and interest.

When kids heard this, they were extra ordinarily happy for they could do a lot by exploring the xo laptop for three days continuously.

From our simple evaluation, most kids did a lot on scratch sugar lab activity.

Kids at the market place used scratch project examples to educate themselves as follows:

Speak up, story and big fish eating small ones games to discuss about;

Sometimes computers were insufficient for the kids if they reported in big numbers resulting to more than five kids sharing a computer.

Xo laptop batteries not sustaining power for a long time as it used to be at first.